My name is Nataly Gattegno, I am one of the principals of Future Cities Lab in San Francisco. We have been in San Francisco for 4 years and also teach at the California College of the Arts. I am originally from Athens, Greece and  came to the US to go to Graduate school. I was born in Athens, did my Undergraduate studies in the UK, worked in London for a couple of years, and then came to the US to do my MArch at Princeton University. The work we do is experimental; we see it as a way to test the limits. Our work has been on the one hand speculative and large scale but on the other hand takes parts of those bigger speculations and tests them out in installations or physical pieces.

The building you wish you had designed?
A lot of the work we do is speculative, proposals that were never intended to be built. But we think some, like the Thermaespheres, would have been interesting to try out! We sometimes get the opportunity to make a piece of a larger more speculative proposal. After we designed Thermaespheres for example, we got a commission to design a pavilion in San Francisco. We basically took the 3 structures from Thermaespheres and experimented with them in the Trilux Pavilion.

The project you designed that makes you the proudest?
A project that was very significant for us was the Aurora Project. This was a project that we did while we were fellows of the Van Alen Institute in New York, and it was probably one of the first projects where there were two types of ideas: one was environmental, one interactive.

The entire project was an interactive surface that was lifted off the ground. It was a project explored  the Arctic, and the transformations that are taking place in the Arctic over time. One of the questions we asked was: how one would represent something that is constantly changing and shifting so far away. The geometry of the surface is organized using maps of the Arctic ice shelf. Its outline and perforations are all based on topography maps, temperature and salinity maps. It is like we took a piece of the Arctic and lifted it off the ground. As people would interact with it, they would actually be degrading or killing the system and the lights within the surface would dim. As you moved away it would brighten up again, triggering this reverse interaction.

In that same show we also had the Glaciarium, a more intimate interactive piece. We asked the gallery to freeze a piece of ice everyday, and drop it into this “lantern”. When you looked into the lantern, you would see this piece of ice but also trigger a heat lamp which would melt the ice over time. The water would drop and hit a contact microphone which emitted the sound of melting ice. The more you looked at the ice the faster it would melt – the viewer was essentially destroying what we are all trying to protect.

A striking detail in one of your projects?
Pretty much everything that we make is digitally fabricated and assembled by hand, so everything has detail in it. The detail that I find most interesting and that I thought I would never be doing is sewing. A lot of our models are sewn because it gives them flexibility, so they can move and shift. We try not to use glue, and when we do we use it to fuse two materials permanently, to make one thing. We’ve become good at making notching systems and ways of connecting things mechanically.

The project you would never design?
For us, it’s hard to say there is something we would never touch. We enjoy working on projects that are open ended and where we can collaborate with the various players. So we would be reluctant to work on a project where someone asked us to do something predetermined, or a project with not enough room for experimentation.

The ideal/perfect city ?
We have lived and practiced in a number of different places, so I don’t know if there is an ideal city, but we are very happy here in San Francisco. We wanted to be in a place where we could both live and work. San Francisco has been a fantastic place to collaborate with people on software, hardware and innovative technologies.

Do you prefer talking or drawing?
When we work together, it’s usually a combination of talking, drawing and modeling. We do a lot of test models. Usually a project has tons of models: we make something, sketch over it, discuss it and model it again… We use a lot of different tools: laser cutters, the CNC mill, the woodshop which allow us to make quick decisions and test things out at multiple scales.

The first time you felt like an Architect?
I don’t think I’ve ever felt ‘only’ like an Architect. Probably the only time I did was when I was interning at an architecture firm. We are architects, but also designers, model makers, problem solvers… I think that what we do is architecture, but then again a lot of people look at our work and don’t call it architecture. It kind of depends on your definition.

The question that’s bugging you?
Why does the environment around us need to be static? Why do buildings need to be the way they have been for centuries even though our technologies have radically changed? Climate is changing, the environment is evolving; how do we embrace that instead of fortifying ourselves against it? How can you coexist with a changing system?

What infuriates you as far as Architecture is concerned?
Mediocrity.

The most ridiculous building in San Francisco?
There is a building in the Mission, it is called the Armory. It started off as an armory, where they stored arms… It’s a whole block, it’s thick, it’s brick, it’s a beautiful building. It had a firing range where they would practice. There are two interesting things about it. One is that it takes a whole block, the second that it sits on an active river creek. The building remained empty for years and the company that currently occupies it is an online pornography company. So now the entire building is being used as a film set. Not only that but the creek has started corroding the foundation and re-emerging in the basement. It is a very interesting building, because of the layering of the history and environment of the site, as well as the crazy program.

The song you listen to over and over again?
I wouldn’t be able to tell you. We have Pandora radio playing over and over.

Your message to young Architects?
Be experimental, be bold, there’s no reason to be conventional. Test the limits, work hard to prove what you really believe in. There is a place in architectural practice for speculation and research, and experimentation. Also, persevere, because it takes a while.

Who is the Architect who accompanies you?
I always have a team around me. We accompany each other in the design process, but we also have certain common references.

What do you remember about your student years?
My undergrad, I remember hating architecture school. I wanted to transfer out of it, I didn’t get it. I was just doing what I was being asked to do and I didn’t get why. But in graduate school I took a studio, and that was the moment where I decided this was it.

What’s next?
We have moved into this bigger space. Expanding was an attempt at another scale of intervention. We have started to make things bigger in scale and experiment with more furniture scale work as well.

Why did you choose the name Future Cities Lab?
The first competition Jason and I entered was an urban competition and we came up with “Future Cities Lab”. It was a book of short stories that we had been reading called “Future Cities”. We really wanted to think of the work that we do as “future thinking” but also having urban ramifications. 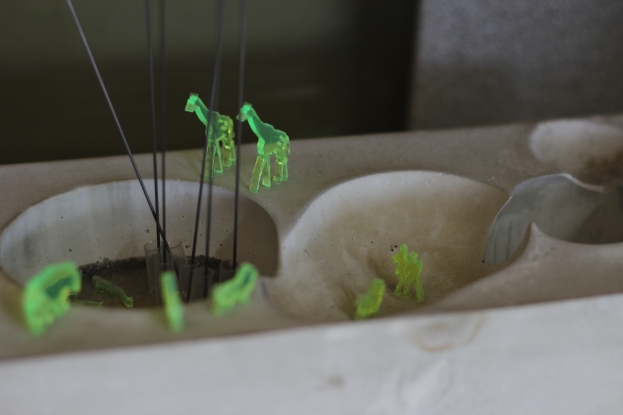 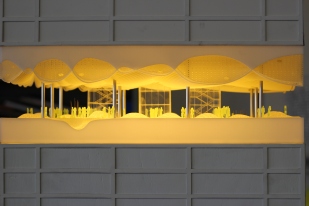 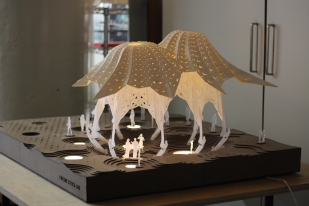